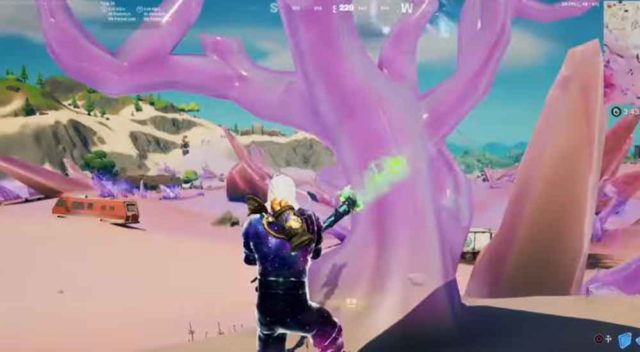 fortnight new challenges for week 13 and it tells us to destroy crystal trees so this is a pretty simple challenge but we going to show you exactly where most of these crystal trees can be found and show you the best route as well. You want to fly in a sort of by the coliseum and there’s actually a small room called the jailor like the prison and this is we suggest you land that way you can get a weapon and some shield before going out to destroy the trees.

So once you fly over the coliseum this is the small little building we were talking about it’s sort of like a prison or a jail so once you get all you really need to do is just grab a weapon maybe grab some shield really quickly so that you don’t die and just in case you don’t know on the minimap.

As you jump down you’re actually going to find your very first crystal tree and this tree is actually purple and once you break them open sometimes they will drop these zero-point dash crystals as well so be on the lookout for what you want to do after destroying the first tree though is break open one of the crystals get the Fortnite Zero Point dash and head into risky reels inside risky reels there’s about four or five more of these crystal trees.

Just be on the lookout for these giant purple trees everywhere are the ones you actually have to destroy now as you’re going through risky rails the only thing to really look out for is we o guards with inside so those things obviously are super annoying and we hope next season we don’t see any of that anymore they finally got rid of most of the annoying stuff in this game and to be honest it’s really like the only thing left is these io guards that continuously try to hunt you down but hopefully, they get rid of those sooner or later but either way well so you only need to destroy five of these for the challenge it’s pretty simple pretty easy but also gets you a ton of XP.

How To Rank In Community Battles And Gain Free V-Bucks?